how to edit a book

Every writer battles word errors. You know the words I mean. Yours might not be the same as mine, but I would imagine you have common word errors pop up in your writing just as I do.

These trouble words can lead to nightmare scenarios that are enough to keep some people from ever writing. Imagine your embarrassment when you find out the query letter you sent to an agent was riddled with common word errors. Or your chagrin when you learn about all your mistakes from various poor reviews after you finally publish your first book on Amazon.

As a writer, you know the power of words. The words you choose leave a lasting impression on your reader. You want the impression to be good, but the incorrect use of words can spoil the effect you work so hard to create.

Unfortunately, common word errors happen more often than would be expected, especially in these days of self-publishing, when some authors cut costs by skipping the editing phase of a book project. Learning how to edit your own manuscript is key to minimizing common word errors.

I’ll be discussing various kinds errors in this series, but in this article I wanted to zero in on homonyms.

Homonyms are two or more words that sound the same (and are sometimes spelled the same), but they have different meanings. When you fully understand each word, and the differences between the homonyms becomes clear, then it’s easier to use them correctly. Here are a half-dozen of my favorite trouble words.

There or Their or They’re? 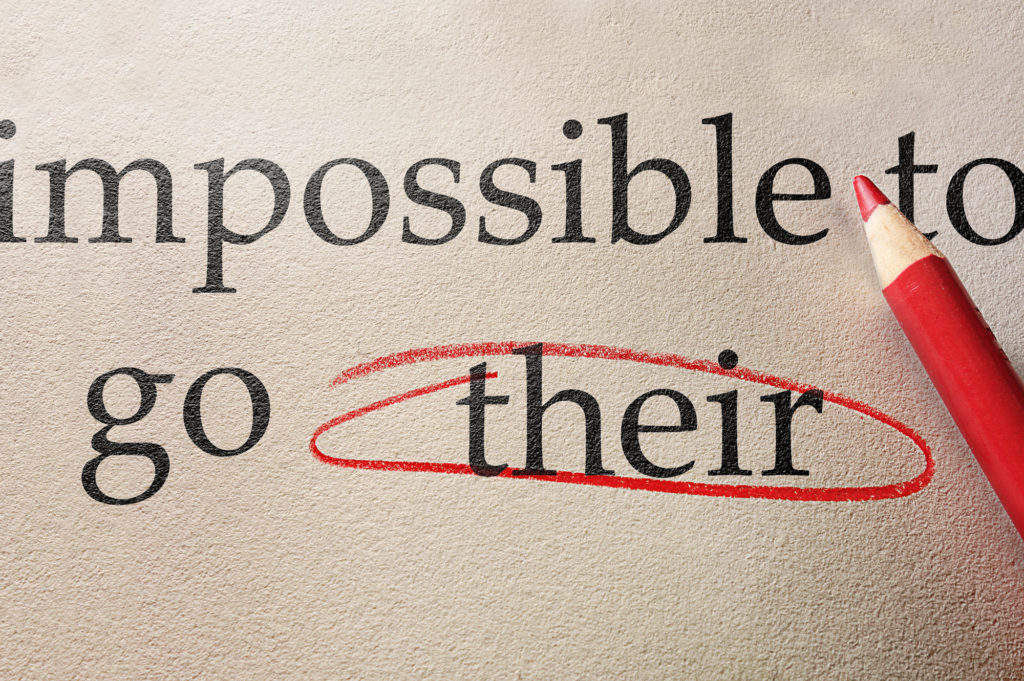 There indicates a location: Put the pot of petunias there.

Their shows possession by people or things previously mentioned: Put their pot of petunias there.

They’re is a contraction of “they are”: They’re putting their pot of petunias there.

Tip: If your trouble word involves a contraction, try expanding it out into two words. For example: “they’re” becomes “they are.” It can help you determine the correct choice.

This one is probably top on the list of common word errors. The confusion lies in the apostrophe. That mark is used to indicate either missing letters (a contraction) or a possession. In this case, the apostrophe signals a contraction.

Its indicates that something belongs to “it”: It’s a beautiful rose that lost its petals.

Again, if you expand “its” into two words you can quickly see if the contraction or the possessive is the right choice. For example:

The child stood on its (or it’s) head.

Expanding out the contraction, you’d get:

The child stood on it is head.

Nope! That makes no sense. Must be:

The child stood on its head.

The misuse of these homonyms leads to funny statements. Your indicates that something belongs to “you.” And you’re is a contraction of “you are.”

For instance, there is a big difference between:

The first one means you’re about to eat, and the other means that you won’t be around long enough to worry about grammar anymore.

Then is used in relation to time, while than is used to show a comparison.

Barry went to lunch at noon. I’d like to go then.

I’d rather go to lunch with Barry than later at 2pm.

Now, it can get really confusing if you’re comparing two time periods, as in:

I’d rather go then than then.

But that’s a different story…

Both words indicate distance, but it’s the quality of the distance that makes it tricky.

I’m farther down the road than she is.

I’m further along in the book than he is.

Tip: Farther has the word “far” inside it. This can help you remember that it has to do with physical distance.

I hope this helps make it far more clear so it won’t give you further difficulty.

Sometimes, it’s just one little letter that makes all the difference.

To compliment is to praise something or someone and to complement is to complete or enhance.

He complimented her on her new dress.

He complemented her so well they got married.

Remember that scene from Jerry McGuire?

Yes, they complemented each other nicely. No compliments necessary.

As you can see, understanding the meaning of the words helps in choosing the right ones so that you can avoid common word errors in your writing. If you find these confusing, I recommend keeping a little journal of your personal trouble words so that you can refer to them whenever needed.