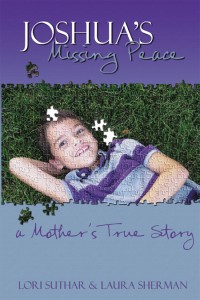 tells the heart-rending story of how, when math whiz Joshua began behaving bizarrely at the age of four, his parents pursued help from the medical community. As is typical, Joshua was shuffled off to a psychiatrist who prescribed heavy medication. Both parents, being holistic in nature, were horrified by the changes in their brilliant son. His behavior worsened, as did his ability to do simple exercises in school.

As Joshua’s symptoms increased so did the medication. Their loveable son was turning into a psychotic stranger before their eyes.Frightened and frustrated, his parents researched solutions, finally putting together the missing puzzle pieces, discovering the true nature of Joshua’s mysterious illness.

He had a severe, but treatable, version of Strep throat, called PANDAS.Driven to help other families avoid the needless suffering they endured, his mother, Lori Suthar, chronicles the details of their son’s two-year nightmare in Joshua’s Missing Peace. Her unique humor is laced throughout the book, as she shares this inspiring story with her readers.

This book is available to purchase on Amazon.